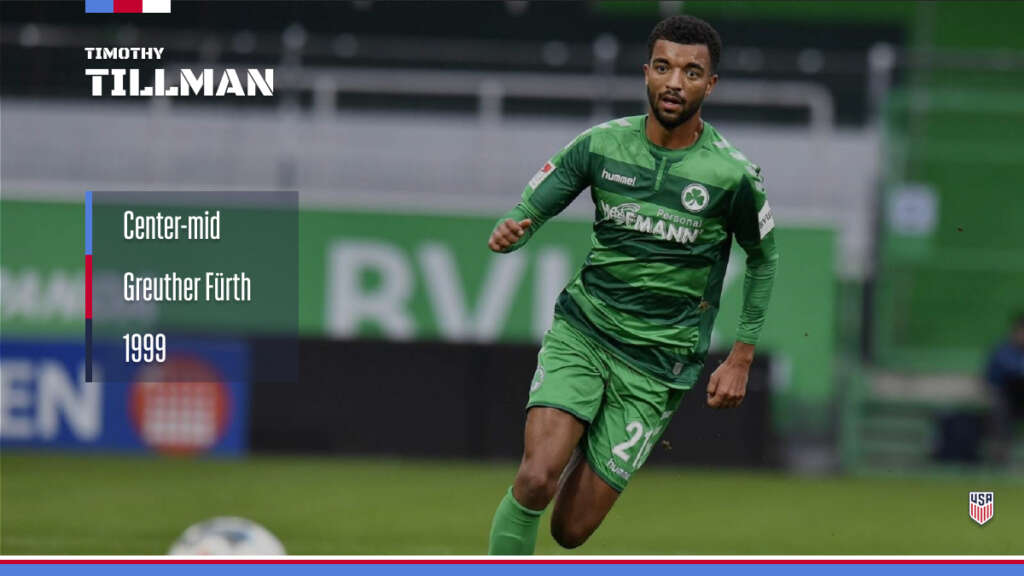 Timothy is an above average sized midfielder with a lean frame. While he isn’t the strongest player, he holds up well in the Bundesliga and wins his fair share of ground and aerial duels. He has above average quickness and speed, making him more than capable of being an effective two-way, box to box midfielder. He consistently uses his quickness and speed to beat defenders one on one and create advantages in transition.

The strongest aspect of Timothy’s game is his technical ability. He is very comfortable and confident with the ball at his feet. I wouldn’t describe him as a highly creative dribbler, but he is very tidy and clean, the ball rarely gets too far from his feet and he is able to create advantages with his dribble.

He’s also a very technical passer. He shows the ability to deliver a variety of accurate and well weighted balls with both of his feet. I really enjoy his ability to deliver courageous and clever through balls that the defenses are not expecting. Timothy is often chosen to take set pieces on corners and free kicks.

Timothy also has good shooting ability. He generates a good amount of power with both feet and consistently puts the ball on frame. He is a midfielder that can be counted on to get some goals and be a threat in and around the 18 yard box.

Coming into this season Timothy was considered an attacking midfielder, but this year he is playing a true box to box, 8 position. At the beginning of the season, his defensive tenacity and awareness was probably his biggest weakness, but I’ve really seen some improvement in that area. A great example is Furth’s last match, on the road, against Bayern Munich. In that game Tillman displayed a lot of anticipation and willingness to get stuck into duels. He showed a level of toughness I hadn’t seen too much of. He definitely raised his level for this very difficult opponent.

On the offensive side, Timothy is a creative, at times composed, and courageous player. At times he thinks a little too creatively when making passing decisions. I’ve seen multiple instances where he is thinking of something that his teammate is not thinking of at all.

One of my favorite aspects of his game is his composure in the final third. He arrives there at the right times and he has the instincts to find that extra ball and make the unobvious play. This is a skill that the USMNT is really lacking.

Timothy’s metrics backup a lot of what your eye catches when you watch him, and in fact, his metrics show that his season is going underappreciated. He has very strong offensive numbers across the board. His non-penalty expected goals per 90, expected assists per 90, shot creating actions per 90, successful dribbles per 90 and progressive passes per 90 all mark as positive for a midfielder.

Some of his weaker offensive numbers are probably due to Furth’s lack of quality as a team and their lack of ball possession. Timothy doesn’t consistently get a lot of opportunities because Furth is usually chasing the game. Most would agree that Furth is the worst side in 1. Bundesliga.

Defensively, he has strong pressure and block metrics, but he has poor tackles, interceptions and aerial duel metrics. I have seen some improvement in the tackling and interception department.

Statistical Comparison vs other USMNT Midfielders

I chose to compare Timothy’s club metrics to Weston McKennie, Yunus Musah, Gianluca Busio, Cristian Roldan and Sebastian Lletget. I would have selected Luca de la Torre, but FB Reference doesn’t have comparative data for him.

Additionally, remember that these are club metrics. We’ve seen that some players perform at a much higher level for USMNT than they do for their clubs and vise-versa.

The data suggest that Timothy Tillman ranks as one of the better goal creation and contribution midfielders in our pool alongside McKennie and Lletget. Similarly, that group also ranks high in dribbling and ball progression, Musah also showing good numbers on dribbles.

On the flipside Busio, Musah and Roldan have more impressive defensive metrics.

I believe that Timothy Tillman profiles really well within Gregg Berhalter’s system and what he is looking for in his dual 8s. The 4-3-3 relies heavily on the midfield as we’ve seen quite clearly during World Cup Qualifying. The system requires the midfielders to initiate the offense and progress the ball into attacking positions or “advanced platforms”. They are also responsible for recovering second balls and creating turnovers within the high press system. Tillman’s recent improvements on the defensive side has given me more confidence that he could be a viable option on the squad. His athleticism allows him to cover the ground that is needed and his value in the final third would be a major weapon.

As of right now, Weston McKennie and Yunus Musah are locked in as starters when available. Personally, I would add Gio Reyna to this mix and would likely be rated ahead of Musah, but we have yet to see Reyna play as an 8 for Gregg and his health is now in question for March qualifiers. Luca de la Torre has potentially solidified himself as the first option off the bench after a strong performance against Honduras and a strong overall season for Heracles in the Eredivisie. The fourth 8 is still up for grabs and I think Timothy Tillman has as strong of a case as any to get a chance. Roldan, Lletget and Acosta continue to get looks there and Booth and Bassett also had a chance to make a case in the December camp.

I have no idea how open Timothy Tillman is to joining the USMNT project and I have not heard many reports on it. He probably hasn’t been on the federation’s radar until this year, which is turning into a breakout year of sorts. Tillman is not likely to be in the DFBs plans, so it’s really a matter of how much Timothy wants to play international football and how comfortable he is if given the chance with the USMNT.

I don’t see Tillman getting that chance in March, even though I would like to see him there. It’s the last window and I think we’ll see very little personnel experimentation. I would love to see Timothy in the Nation’s League group stage this summer. That would be a great environment for him to get a feel for the group and for Gregg and his staff to get a long look at Timothy in practice and potentially in a competitive match.