We also had an additional five players transfer to other clubs within Europe with the hope that it will increase their playing time. As we have all been looking for things to look forward to in 2021 I think the soccer gods have given us a sign that there are better times ahead of us. Let’s take a look at all of our new faces in new places.

Outlook: One of the most debated players on USMNT twitter has made the decision to ply his trade in the English Championship with Swansea City. Swansea City currently sit second in the table after 26 matches played. One of the main reasons that Swansea are currently in second place is due to the stout defense they have been playing. They have only conceded 15 goals thus far this season which makes them the stingiest defense in the league. Therefore, Swansea has brought in Jordan Morris to bolster their attack. Over this past weekend Jordan made his debut coming on in the 83rd minute as a Forward against Rotherham. While it was just a short cameo Jordan did look lively and hopefully will have more minutes coming his way soon. If Morris does produce during his loan it will certainly make the debates online even more spicy than they have already been.

Outlook: The current situation of Swansea has already been covered but can we take a minute to appreciate how amazing it is that a club in England chose to get two USMNT players added to their squad in one transfer window! Arriola recently showed out during the recent USMNT friendly against Trinidad and Tobago with two goals and one assist. If there was any doubt about how Arriola would come back after his ACL surgery it is safe to say that he put those concerns to bed. Arriola looked fit and stretched the back line of T&T for most of the night. Can we also take note that it does not look like Arriola missed a workout or a meal during his recovery? Dude looks ready for the physicality of the English Championship. Here is to hoping we get to see both Arriola and Morris bombing down the wings for Swansea City in the near future.

Outlook: Barnsley FC currently sit in 12th place in the English Championship and have been quite up and down this season. While averaging a meager 1.1 goals per game this season Dike has been brought in to increase the competition at their CF position. Dike burst onto the scene this past season and has quickly become one of the more intriguing CF prospects in the USMNT pool. After posting eight goals and three assists in 17 appearances last season it would appear that he has also piqued the interest of clubs abroad. We will now get a chance to see if Dike can continue is rocket ascension while helping Barnsley climb up the table.

Position: CB (pick R or L he can play them both)

Outlook: Genk currently sit in 3rd place in the Belgian Pro League after 25 matches played. They have often deployed 3 center-backs and I think McKenzie’s versatility is one of the reasons Genk targeted him during this window. Another strong suit of McKenzie’s game is his passing ability. Genk have had the fourth most possession per game this season, 52.2%, McKenzie should be in a position to show off his skill set. McKenzie has already made three appearances for Genk and most recently had his best showing yet with a clean sheet and completed 92% of his passes.

Outlook: Borussia Monchengladbach (Gladbach) currently sit 7th in the Bundesliga after 19 matches played. While they have struggled to keep clean sheets it is fair to say that their style of play makes them one of the more entertaining team to watch in the Bundesliga. They have amassed 36 goals this season which is good for the 4th most in the league. Their current starting RB, Stefan Lainer, is still under contract until June of 2024 so Scally will have to fight his way to first team minutes. The positive news is he has already trained with the first team during his short time with Gladbach. Another positive for Scally is he has his good friend Gio Reyna just up the road to help him acclimate to German lifestyle. 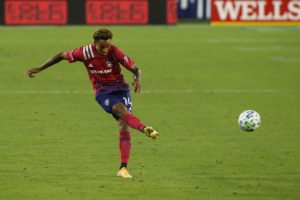 Outlook: A.S. Roma currently sit in 3rd place of Serie A after 20 matches played. After much drama and speculation this transfer has finally been made official. Reynolds was recently bombarded in Rome by Italian media as he exited the airport. Reynolds is another young American who burst on the scene over the past year and is another addition to the incredible depth we have at RB. The most note worthy part of Reynolds transfer is that he is one of very few Americans that has ever transferred to a top 5 club without ever appearing for the Senior National Team. These are unprecedented times for young American footballers. Reynolds recently state in his introductory press conference that what drew him to Roma was the developmental plan they had for him. He will be training with the first team on a daily basis so we will be keeping a close eye on him as he nears his first team debut.

Outlook: RB Salzburg currently sit in 1st place of the Austrian Bundesliga after 15 matches played. Aaronson comes off of a phenomenal season with the Union where he posted four goals and three assists in 1656 minutes played. He has transitioned smoothly at Salzburg where he has appeared in all three games since returning from the winter break and has one assist. Salzburg has a history of being a spring board for players in Europe so we have reason to believe that Aaronson will develop excellently under fellow American head coach Jesse Marsch.

Outlook: Justin Che recently trained with FC Bayern for three weeks and must have impressed while he was there. Many thought Che would be the replacement for Bryan Reynolds at RB for FC Dallas. Last season Che played for North Texas SC and had 1 assist while compiling 1427 minutes. While breaking into the Bayern first team is more than likely out of the question any time soon. The training environment at Bayern is top notch. Che will be competing against some of the top young talent from all around the world. If he can impress while he is with Bayern on loan then due to his German passport Bayern could execute an option to buy him.

Without a doubt, a transfer windows to remember

Overall this transfer window has been like nothing we have ever seen. My question to you is… is this a one-time thing that has been exacerbated by rumors of an MLS lockout? Or is this the “new norm”?