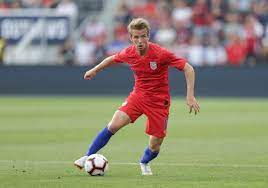 How I would rate him after the Switzerland game and I’m probably not rating him high enough.

JY played very well. He made two mistakes – one of which started the sequence for the first goal. Otherwise, I would be talking about how much better the 6 depth is than I thought. https://t.co/VlMbnILWAj

This is a big one. The 6 in the modern game is rarely a destroyer. They contain attacks. Even in a pressing scheme when they step forward during the press, the goal is less to win the ball and more to minimize the counter.

Yuiell failed on this. I talked about it in my last post.

Yueill stepped up to press the cm, which was correct.  The CM bobbled the pass and my take is Yueill’s instincts drilled into him with the Quakes kicked in. Instead of quickly getting back to his spot, he hesitated and considered trying to win the ball.  The result was a Swiss player drifting into the 6 zone and getting a 2v1 on Brooks.

The job of the 6 is to contain.

Yueill is mostly good at this but had one key moment of failure in the last game. The good news is that he wasn’t beat 1v1 (which is what many feared). He simply had a concentration slip and didn’t get back to his zone. This allowed them to pass around him.

He has a high game IQ. He manipulates defense very well. You can see it in the clip above and any game I’ve seen him play. One simple example:

An opponent was tracking Yueill and pressing Dest. The easiest pass was to Brooks but Brooks was close to Yueill and would have been under pressure pretty quickly. Yueill simply drove forward into space and took the defender with him, opening up an easy switch to Cannon on the right. It was a simple thing but is the type of thing Yueill does regularly. If he can’t get the easy pass, he makes the right read and move to make passes easier for his teammates. He knows where they want the ball to go and he helps it get there. He does this a lot in the build up too which is hugely helpful for a team that struggles there (more to come on that later).

He also does this when teams try to take the 6 out of the game with man marking. He moves the defender to open up line breaking passing lanes for his teammates.

So Yuiell has the high game IQ. He has pretty good positional discipline. I don’t watch a lot of the Quakes but have seen and read their focus on intense 1v1 defending. Below is a good article on Yueill developing defensively.

Yueill’s challenge may be transitioning from a club that asks lots of defensive intensity and 1v1 play vs playing the 6 which has to be more zonally focused. His club instincts may let him down.

Defense and athleticism are the areas where people think he is limited. Until this game, for me it was simply unproven. Adams is a really good 6 defensively not because he’s a great tackler. That’s not their primary role. It’s because he’s crazy athletic, very hard to get passed and has really good recovery speed. Not all 6’s are Adams. You don’t have to be those things to be a good 6 or be good defensively.

Tuchel plays Jorginho. Kante roams ahead of him and Jorginho is the deeper player. He’s athletic enough, reads the game well enough to be where needs to be. Can Yueill be that? It’s been a large unknown until the Swiss. Watch the clip above and show me one example of him getting beat 1v1. You can’t because it didn’t exist. What you see a lot of are interceptions, challenges around players to deny them the ball and him consistently cleaning up the play, winning the second ball and starting the attack. It’s the first game I’ve seen him play that said to me he can be a reliable back up to Adams even against good teams.

He doesn’t need to. He needs to do exactly what he did against the Swiss. He needs to read the game well, balance the press with positional discipline and be smart with and without the ball. This was the fist data point saying he can do that.

Some of those weaknesses can be offset tactically. For example, in the mid block press when Dest pressed forward it was the 8’s job to cover the wing. If Adams is there, it could be Adams job or Brooks with Adams covering for Brooks. Other adjustments could include better drilling on when Yueill should go forward vs fall back. He doesn’t have the recovery speed, he may require limitations on when he can get forward such as having an 8 able to back him up. Or it could be they need to better adjust their tactics to his range, so that if the opponent breaks the press and Yueill can’t leave a +1 behind him when he goes forward, the team immediately falls back to a mid block.

A third option is moving to 3 in the back where he is paired with someone like Mckennie or Musah- similar to Jorginho being paired with Kante.

The point being there are lots of options.

The USMNT does not have many press resistant midfielders. The only player in the pool that really fits that characteristic is Nagbe who has no interest in returning to the National Team. The US is getting this quality collectively from their movement. and technical quality. There are limitations to this that I hope to get to in a future article but against a very good team, Yueill was an asset in the build up and not a liability. His movements were very good to read the space and anticipate the pass before the pass.

With a press resistant 6, the US can use this build out shape and play through the 6. The 6 can make 1 player miss and acres of space to drive or pick out a pass. Without that the US has to rely on other methods.

In the build up, the US is using positional play to build out of the back.  To heavily press, the opponent has to go 1v1 over most of the field.  With the opponent’s gk not part of that 1v1 set up, that leaves an advantage somewhere.  The US want to use movement and positional play to find the find the weak spot.  The CM’s, wingers, and 9 are pistoning and the 6 is moving laterally and diagonally.

It can work.  If we had a press resistant 6- a Nagbe, Kovacic or Busquets, – it adds an easier option to get out of the back.  The US doesn’t have that. Musah is the closest. Yueill does an excellent job though of making the lateral and diagonal runs.  The passes to diagonal runs were not going to come from Horvath as he was not that confident in slotting a narrow pass.  Steffen has and will hit those runs.

So though neither he nor Adams is as press resistant as we would like, both can work well.   Adams is more agile than Yueill but this is mostly from the read and movement.  Yueill isn’t that large of a drop off.

Deep play making (DLP) ability is the other point of contention with US fans. Do we really need it? I don’t know about need but we do really want it. Watch the clip again. DLP is what breaks down the defense in transition and in possession. It’s not just a tool of possession. It’s the long diagonal to the free man on the open side. It’s the quick release for the counter. It’s the big switch. Defensively, teams want to load one side and make the team small. Offenses want to make the field large as possible. DLP’s make this possible.

I say it again- watch the clip. From hitting Cannon on the opposite side to slipping in Dest so he could get 1v1 on the keeper, this is a big part of the US offense. Yuiel’s passing range is greater than Adams. Both can hit the line breaking pass. Several times in the clip above it was Yueill’s pass that gave Reyna, Mckennie, Dest or Sargent great attacking opportunities. I don’t care which phase you’re wanting the US to score from, you want that ability.

There is a reason that in the Championship final, Tuchel paired Kante and Jorginho. That DLP ability is key. You can get it from other places on the field. Mckennie had some really good switches. Brooks had some good ones. Mount’s pass to Havertz in the final was one. Do it doesn’t have to come from a lone 6 but you want that ability on the field and you want it in deeper positions. If you want Mckennie pressing, it still needs to come from somewhere deeper and the more you have that ability then the more you can keep the field big for the offense.

Why do we doubt Yueill?

If he can do these things why are we so worried? Why do fans (including yours truly) still think the 6 depth is so thin? I think there are two reasons.

First we spent 2019 with Trapp and Bradley in that role. The words “traffic cone” were frequently used. Is Yueill another Trapp? Will he simply be too slow or too limited athletically to play this role at a high level. Before the Swiss game, I would have said yes. However, watching him play against Switzerland there was not one moment when I thought he was at an athletic disadvantage. He didn’t get beat 1v1. He was not a traffic cone. He also did not simply sit back in a low block and let the others do all the challenges. He frequently stepped up, made the challenge, cut off passes and played really excellent D. I don’t think he was dribbled around one time. I can’t think of one time the Swiss had an attack through the middle. The clip shows him time and again reading the game faster than his opponent, winning the second ball, and getting physical.

The other thing against Yueill is he is 24 year old player with no known European interest. He’s a straight up MLS player that seems to excel there with little interest or known prospects in Europe. For fans who focus on Europe, this is a red flag. We see Busio’s, Johnny’s, even Long as prospects who haven’t yet made it to Europe. There has been interest in all of them. We see Adams, Mckennie etc as the gold standard for talent, progressing at the highest levels. If they are not playing or if there isn’t interest in Europe for the player, we wonder (or think we know) what’s missing.

I can’t answer that. I can’t say if that’s the correct view or not. I can agree that evaluating MLS talent vs Eureopean talent is challenging. The truth is we don’t’ have another European 6 besides Adams.

What we can do is evaluate Yueill’s performance against the interntaional competition he faces. It’s one data point, but it was an excellent data point for all his weakneses.

Ironically, Yueill was great at the things fans doubt him for and made a couple of huge errors in the things he’s known for. That’s a mixed overall grade for Yueill against the Swiss but great news for the USMNT depth chart at the 6. We have a back up the 6 to Adams.