As the US Men’s National Team wrapped up their final International window before heading to the World Cup in Qatar they are posed to possibly have one of the youngest teams in World Cup history if the roster allows.

Since the 1950 World Cup, there have been eight teams with an average below 24.0, with the best finish among those eight teams being the 1966 North Korea n team who lost in the quarterfinal to Portugal and had an average roster age of 22.455, Turkey was the team with the next best-finish at the 1954 World Cup and had an average age of 23.409, but wasn’t able to advance out of the Group Stage.

It’s worth noting that the US Men’s National Team from the 1990 World Cup field is a team with an average age of 23.591 & finished 23rd of 24 teams. While the USMNT World Cup team will be slightly older than 1990, they have something that the “Modern Era” teams of the 1990s’ didn’t have with is a high level of competitive club soccer, with nearly 70% of the primary player pool and is playing throughout Europe.

A look at the USMNT World Cup Rosters Age Data

2018-The values for the 2018 projected squad are based on a 35-man roster and based on comments made by Bruce Arena on who he would have likely brought to the World Cup along with writers’ projected USMNT squads. It’s enough to get an idea of what the average age would have been along with the

For the 2022 USMNT roster it will likely not have any players in the 33 and older range on their roster unless somehow Tim Ream is selected. 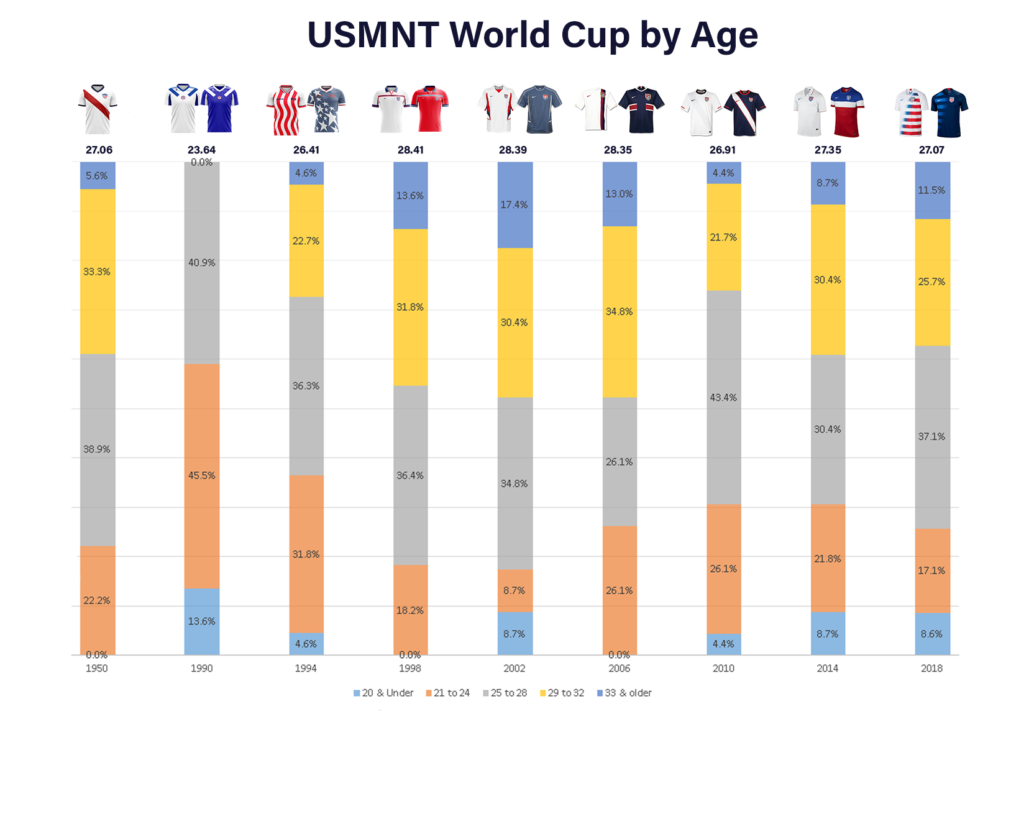 Headed into the 2022 World there are legends Lionel Messi (35) and Cristiano Ronaldo (37) if healthy will be participating in their fifth and likely final World Cup along with many other world greats who are also likely to be playing in their final World Cup, Robert Lewandowski (34), Luis Suarez (35), Edinson Cavani (35), Luka Modric (37) and Manuel Neuer (36) 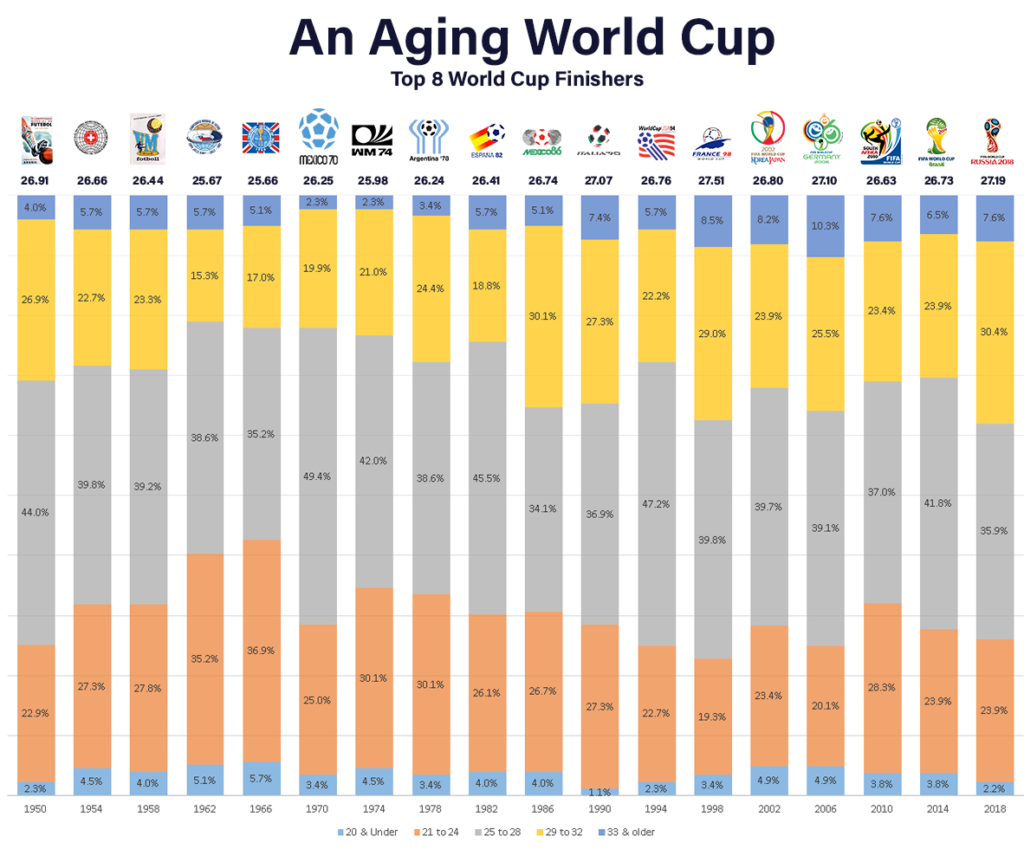 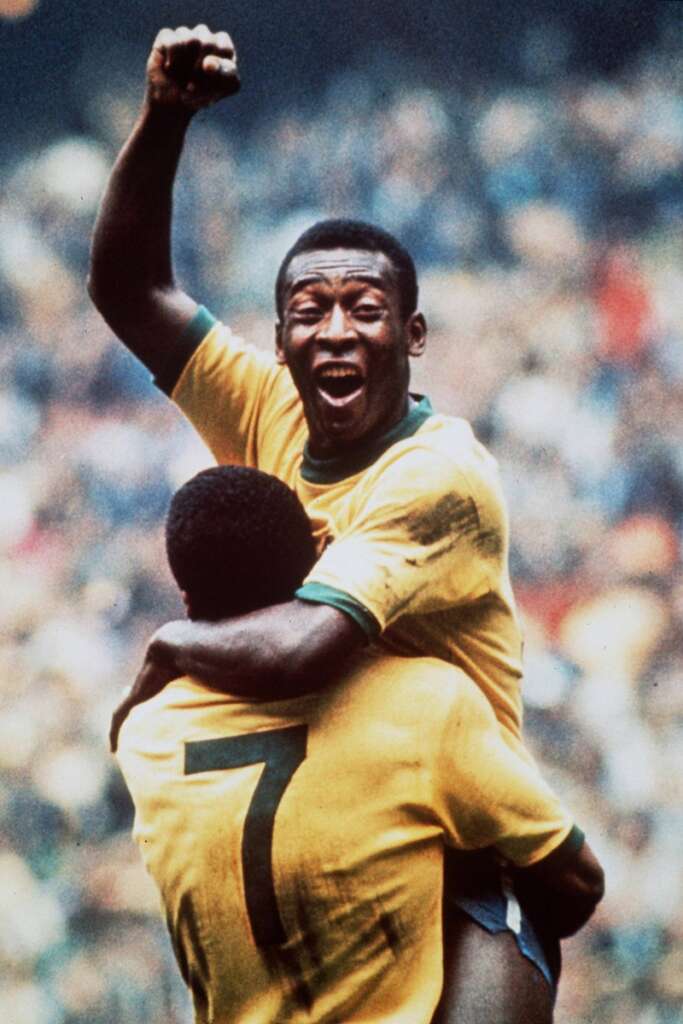 Julian Green currently holds the record for being the youngest USMNT selected to a World Cup roster, earning a cap and scoring a goal, and is currently the 7th youngest in World Cup History to score goals with an age of 19 years, 25 days. Of the USMNT Players involved.

Julian Green Goal at 1:23 on video

In the same 2014 World Cup that saw the youngest-ever USMNT player score, it also had the oldest USMNT player Jermaine Jones score an amazing goal vs Portugal. 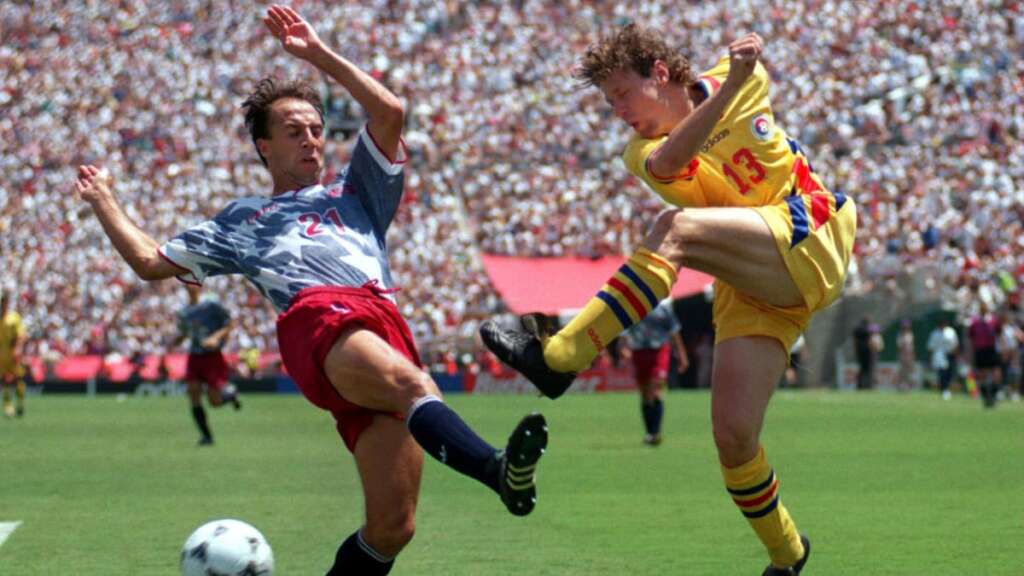 With November 20th rapidly approaching a lot of questions remain for the US Men’s National team and whether or not they will be able to put everything together and get out of their group. A lack of veteran leaders are missing from this very young yet talented group and when they get on the biggest soccer stage in the world they are going to be able to use the experience and playing at one of the highest levels in Europe to overcome their age, experience and at time maturity at the 2022 World Cup and be one of the youngest teams to advance to the knockout stage, this USMNT fan truly hopes so.