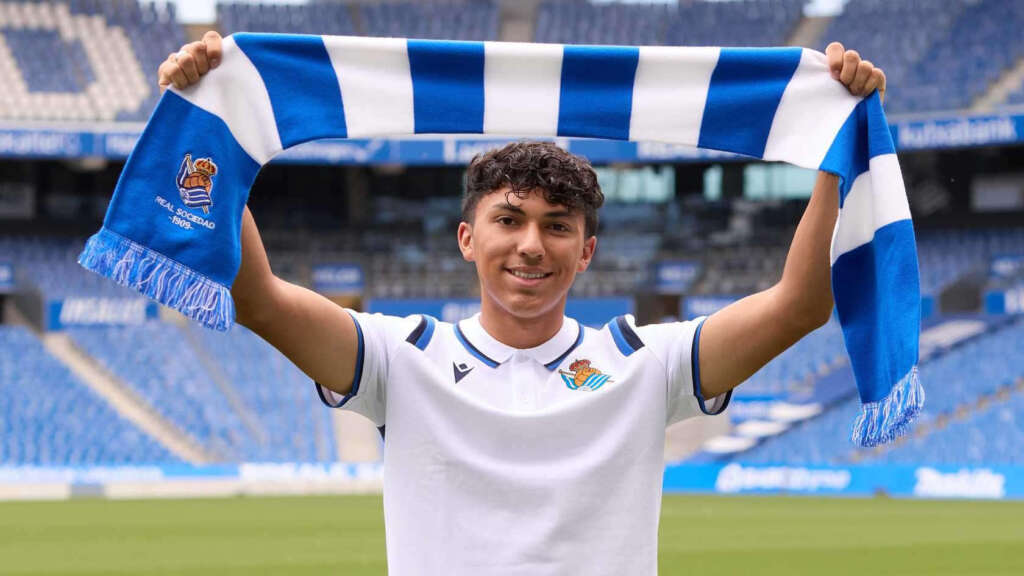 Jogo In San Sebastián – A Look Into The Numbers

Jonathan Gómez has had an expectedly rocky start to life at the Reale Arena, but no one expected him to cement himself into the starting XI for Real Sociedad B and adapt to a new environment so quickly. It is quite remarkable to see Jogo already averaging 89 minutes per game in 4 straight starts, playing as if he has known these players since he was a young boy. It was only natural that an 18 year old from USL would initially struggle with being thrown headfirst into a relegation battle, but it is strikingly unnatural for one to bounce back from those initial struggles after only 3 matches. 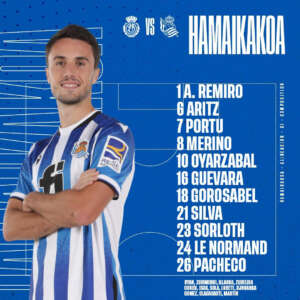 Arriving in the January transfer window, Jogo was included in the RSB matchday squad as an unused sub in both the 3rd and 4th matches for which he was available for selection. The following match, he made his debut, starting in a 3-2 loss away to SD Ponferradina on the 14th of February. Since then, Jogo has gone on to make four straight starts, playing the full 90 for all but the most recent match, in which he was substituted off in the 86th minute. Additionally, the flashes of quality that Gómez had shown in his first three matches were enough for Imanol Alguacil to see the value in beginning the process of integration into the first team, naming the young left back amongst the substitutes for Real Sociedad’s La Liga match against RCD Mallorca on the 2nd of March. Now, let’s take a look into the statistics behind Jogo’s performances, breaking down what they mean in terms of his development, concluding with a detailed overall analysis of the areas of his game which he needs to improve upon. 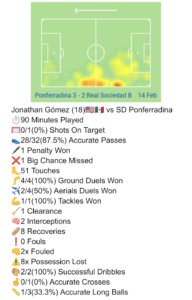 Jogo had an impressive showing for his first outing with his new team, in a new league, and in a new country. He showed real quality on the ball, confidence, composure, and good decision making on both ends of the pitch. Putting his technical ability center stage, Gómez completed 87.5% of his passes, delivered dangerous balls into the box, and had a 100% dribble success rate. He was ever present on the left flank, making dangerous runs into the box, tracking back to defend, drawing two fouls, and even winning a penalty by cutting inside with a brilliant, lung bursting run into the box, forcing the keeper to commit to a sliding challenge. In the same vein, Jogo put on a solid defensive performance, winning 100% of his ground duels and tackles, as well as 50% of his aerial duels. Additionally, the young left back registered an impressive 8 recoveries, 2 interceptions, and 1 clearance in a performance that perhaps offers a glimpse into what Jogo at his best could look like. The only major criticism that I have of this performance is that he skied a massive chance right in front of goal on a low volley, he has lots of room to improve on his finishing, but as a player that often finds himself in the right positions, it is a great sign that he has the confidence to take those first time chances himself. 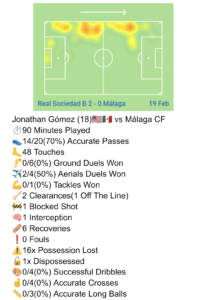 This performance was a real struggle for Jogo, despite making some good runs and even getting a hockey assist, he really couldn’t get anything going for him technically. Likewise, excluding a performance saving goal line clearance, his defensive contributions left a lot to be desired. Now, before you go and write off his first performance as a fluke, allow me to provide you with some context as to the state of play in this match. Coming out of USL, it was expected that he would struggle his first time playing against a side that parks the bus and keeps possession. Málaga were playing for a 0-0 draw and tried to keep the ball in midfield, playing a 3-2-4-1 with wing backs, a flat 4 midfield, and a deep lying forward sitting just ahead of them. In the first half they had 49% possession, 0 attempts on goal, 0 corners, 0 crosses, and 3 yellow cards. You get the picture, they parked the bus, conceded in the 35th minute, and then made offensive minded changes in the second half after they conceded another goal in the 52nd minute. In need of two goals, they brought on a left winger and their first choice striker in place of a 19 year old striker and a wide midfielder in the 57th minute, switching to a 3-4-3. They had 80% possession, 7 attempts on goal, 6 corners, 3 big chances, 4 crosses, 1 yellow card, and out-passed RSB 332-83. The changes that they made in the 79th minute were all like for like. They couldn’t finish to save their lives, they scuffed two of the three chances that they had, and Jogo cleared the other one off the line. That being said, Gómez was kept quiet on the ball by a parked bus in the first half, held to only 14 from 20 passing, 0 from 4 dribbling, 0 from 3 crossing, and 0 from 4 attempts at long balls. In similar fashion, Jogo made poor decisions in the final third, opting not to make an early pass to set up a give-and-go with his striker on the counter, instead continuing his run. Once in the 18-yard box, rather than making the cut back to an unmarked teammate just outside the arc with an open look on goal, Gómez slowed the counter with unnecessary dribbling. In the second half, the young left back got torn apart defensively by grown men playing dominant attacking football, he went 0 from 6 in his ground duels and got dribbled past on his lone tackle attempt. Much the same, he lost possession 16 times and was directly dispossessed once. There were however some redeemable parts of his performance, including the aforementioned pre-assist and spectacular goal line clearance with his trailing right foot while sliding in towards goal. Other standouts were a good shot block, a clever back-heeled flick to win a throw-in, and a clearance from inside the arc. He also made 6 ball recoveries, an interception, and won 50% of his aerial duels. Jogo has much to improve on from this performance, particularly his physical strength, vision, and decision making in the final third.

I rate his performance against Málaga a 7.3/10. 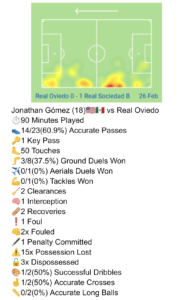 This was easily Jogo’s worst performance so far with Real Sociedad B, he made a massive defensive error in the 90th minute that would have cost his team two points, if not for an excellent penalty save by Andoni Zubiaurre. Gómez committed a handball inside the penalty box while defending against a 40-ish yard indirect freekick from 10-man Real Oviedo. This is basic defending, you don’t contest a header leading with your hands way above your head. He ends up handling the ball a few times here. Jogo has awful technique when contesting aerial duels, even when he wins them. Adding onto that, another shortcoming of his is that he lacks physical strength, this is quite apparent from the fact that he was dispossessed three times and only won 37.5% of his ground duels. In addition, he lost possession a concerning amount of times for a defender, while only recovering the ball twice. Just the same, his tackling was poor, he once again couldn’t buy an accurate long ball, and he registered a well below average passing accuracy of 60.9%. The kid has real quality on both ends of the pitch, but he gets bullied off the ball very easily. On the contrary, despite the glaring issues, Jogo did put in some good line breaking runs, drew two fouls, and completed a nice little dribble. He even put in a good cross and made a key pass, as well as registering an average amount of clearances and interceptions. His defending was very poor here, at one point he even let his mark get past him, and who would have been in on goal 1v1 with the keeper, if it wasn’t for his poor ball control. 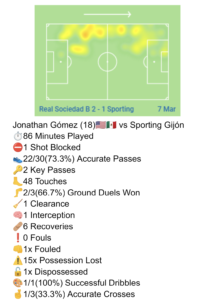 Jogo really bounced back from his slump with this performance, there were a lot of visible improvements from the last two matches. He started the match off brightly, making a dynamic run in the 13th minute from his own half into the 18-yard box, ending with a low-struck effort towards the far post which was met with a block by a defender. Gómez made numerous line breaking runs into the box, constantly finding himself in good positions to receive and progress the ball. He progressed the ball well against Sporting, registering an impressive 2 key passes, a solid 73.3% passing accuracy, and delivered 1 accurate cross from 3 attempts. Jogo seems to have learned to stick to his strengths, avoiding attempting any long balls, in favor of carrying the ball up the pitch himself and making quick give-and-go passes. He looked really good on the ball, kept his dribbles tidy, and made 6 ball recoveries. Just as well, Gomez tidied up his defense as he won 66.7% of his ground duels and made 1 clearance. Equally, the young left back made good use of his pace to make an interception, and then draw a foul 30 yards out from the opposition goal. In doing this, he won a freekick in a good position and snuffed out a potential counter attack. On the other hand, the only criticisms that I can make about this performance are that Jogo lost possession 15 times and was dispossessed once.

Jogo would particularly benefit from increasing his physical strength inorder to become less susceptible to being muscled off the ball in contact situations. In addition, while Gómez has good ball-striking technique, he often delivers crosses to where he expects his teammates to be, rather than where they actually are. Similarly, his decision making in the final third needs improvement as he tends to lean too heavily on his dribbling, opting to take extra touches to cut into the box and deliver the ball with crosses or cut-backs, rather than making the early pass or playing the give-and-go when the opportunity presents itself. Building on that, when a cut-back does present itself, sometimes Jogo ignores it in favor of dribbling further into the box and squaring the ball to a teammate that isn’t in a good position to score. Lastly, he is a good defender, but my biggest concerns are that he just isn’t strong enough yet and his aerial technique is awful. Nothing that good coaching, a change diet, and physically maturing can’t fix.

This is a hard no for me, as he hasn’t even completely settled into La Liga 2 just yet. And, while his first and fourth performances were solid, the other two were very poor. To make it clear. Jogo is not yet ready for La Liga, he has had growing pains and is still adapting to his new team in a new environment. I firmly believe that rushing Gómez into the first team at Real Sociedad without fully integrating him would only hurt his development, and the coaching staff there seemingly agree. Just the same, if not more so, rushing an 18 year old, especially one who hasn’t even broken into the first team at his club yet, into USMNT set up for World Cup Qualifiers will only serve to hinder him. Although Jonathan Gómez is a fantastic prospect, he is nowhere near developed enough to play in WCQ, this fanbase needs a reality check.