Long-time USMNT No. 1 goalkeeper Zack Steffen has had a bad game again, this time for Middlesbrough in the English Championship.

An idea often expressed in American soccer circles is that Steffen is in bad form because he hasn’t gotten much playing time for Manchester City. The implication is that Steffen usually plays well. Alas, Steffen’s questionable shot-stopping is not a recent development; It’s been a feature for the entirety of his career.

Let’s start in MLS where Steffen was a below-average shot-stopper: 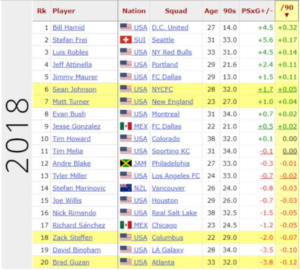 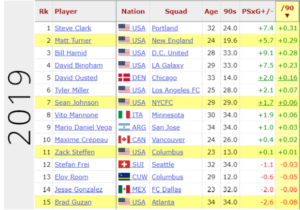 G+ tells us Zack’s distribution was just enough to take him from a slightly negative to a marginal positive relative to the league where fellow American Matt Turner has been, statistically, its most valuable player.

Things didn’t get better in the Bundesliga: 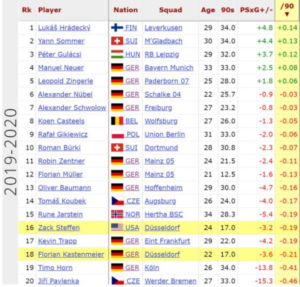 You might notice that the player 2 spots below Steffen is… Florian Kastenmeier, Zack’s backup. Dusseldorf would get relegated. They got roughly as many points per game with Steffen in goal as they did from games where Kastenmeier was the netminder.

That leaves us with his time in England where he’s been quite error-prone:

While Zack hasn’t played enough for us to use metrics like G+, post-shot xG or DAVIES, these types of mishaps seem to happen every game. Steffen wasn’t a good shot-stopper in MLS, and from what we’ve seen thus far, this hasn’t really changed.

2. A Misconception about Shot-Stopping

Many people seem to think that the quality of a shot-stopper is mostly determined by how often they make breathtaking saves.

In truth though, a huge part of  “shot-stopping”  is positioning. Steffen is a great athlete and can make amazing saves(maybe this is why City thought he had potential), but making amazing saves is supposed to be a last resort. Good goalies are good because they set themselves up so they don’t have to make amazing saves in the first place:

Much of the response to these kinds of goals has been “Steffen had no chance!”, largely based on the difficulty of saving the shot. What this misses is that the shot is only so hard to save in the first place because Steffen is out of position. Steffen’s positioning has been an issue dating back to his days in MLS:

Here Steffen stands too far to the right making an otherwise saveable shot nearly unsaveable. Again, the issue is his positioning, not his ability to dive towards the ball once it’s hit.

Steffen’s athleticism has allowed him to make many spectacular saves, but ultimately Steffen is a bad shot-stopper. His positioning/decision-making has also made him subpar at controlling his area, and has often turned what’s supposed to be his biggest strength(distribution) into a significant liability. We saw this away vs Mexico, where almost all of Mexico’s danger came, at least partially, from misplaced passes.

Steffen simply isn’t good enough, and that has been true for both club and country. While fellow American net-minders Matt Turner and Ethan Horvath’s play has ranged from elite to “MVP-level” in MLS, the Europa League, Belgium, ect, Steffen started out as average in MLS and now in England hasn’t even been reliable against third or fourth division opposition.

Ultimately, this stretch of bad club play has translated to Zack’s performances with the NT: 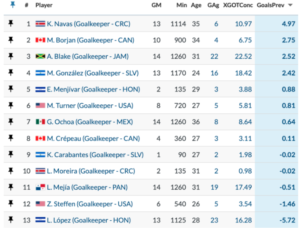 Steffen has been given excuse after excuse but the reality is he’s not good enough, and frankly, he never was. By hype, Steffen may be our #1, but by the reality of what’s happened on the field, Steffen shouldn’t be on the roster. Horvath has had similar issues finding playing time, but when he plays, he’s good. In the league where Steffen was average, Sean Johnson is having a career year: 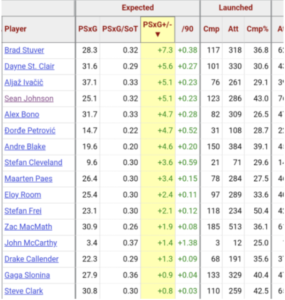 Waning MLS legend Stefan Frei is still doing a better job stopping shots in league play this season than Steffen managed when he was still signed to the Columbus Crew. He also earned a well-deserved MVP after leading Seattle to a historic Concacaf Champions League win.

Whatever our hopes for Steffen might have been, he’s not lived up to the standard various other American goalies have set. Simply put, it’s time to move on.