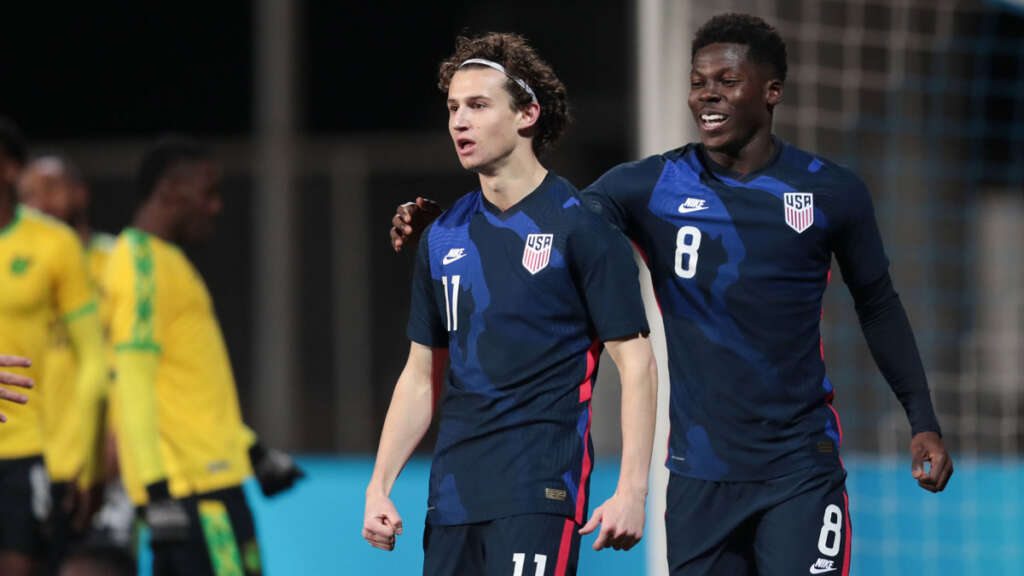 During the June 2022 international window, we got to see the US play against Morocco(3-0 win), Uruguay(0-0 draw), Grenada(5-0 win), and El Salvador(1-1 tie). This window gave us a chance to see both Brendan Aaronson(Leeds) and Yunus Musah(Valencia) operate from the center of the park.

Analysis and discussion on soccer players often are slanted toward offense and on-ball events. This seems to hold true for the recent discourse surrounding Musah and Aaronson. So we’re going to look at what they’re doing off-ball as well as the general effect these players are having on their teammates.

From Musah’s first half against El Salvador, here are the “on-ball” plays: For positives, there were 3 multi-man runs, and a good progressive pass, For negatives, there were two plays he was bullied into back passing, the errant pass he played in front of the backline, an instance of immediate dispossession when he got over-eager with the ball, and a bad clearance he attempted with space and time(for whatever reason the US backline needed 4 attempts to clear here). From the second half, the on-ball stuff improved significantly with a couple key passes, and two good scoring chances in addition to 4 great moments of ball progression.

My concern comes from what happened “off-ball”. Throughout the game, Musah was not rotating when his teammates ventured forward and he often didn’t track back properly when he made offensive forays. This was clearly an issue in the first half where we weren’t able to sustain pressure on his side of the field and with El Salvador often running right back into the US’s final third. When Aaronson was subbed off(more on that later) the US was not able to sustain pressure from either side of the field and El Salvador was able to overrun us centrally for 20 minutes with our only real response being long-balls to McKennie.

This is also not an isolated pattern. Against Morocco when Adams went high, Musah often didn’t cover his man. leading to multiple dangerous positions from line-breaking passes. When Uruguay subbed in their first-choice midfielders, Musah was caught out of position so much that Aaronson ended up playing like a 2nd 6. This shouldn’t be too surprising given that in La Liga Musah is dribbled past a bunch, loses tackles a lot, and has an abysmal pressure success rate of 9%. Keep in mind Musah is being compared to other wingers here who have to do that type of stuff(ball-winning, pressure etc)  less often than mids do. With that in mind, we have a decent explanation for why Musah isn’t allowed to play in midfield for Valencia.

You simply cannot be so half-hazard defensively vs elite teams.

Aaronson was quieter on the ball “offensively”: He had a pass here or there, beat a man a couple times, and played it off to Pulisic to win a free kick. The brunt of his “on-ball” contribution was defensive:

Out-ball winning Adams is pretty incredible(not sure I agree with the conclusion), but where Aaronson really shined was off-the-ball. Aaronson stopped El Salvador’s attacks 6 times with good off-ball pressure. I count exactly one negative defensive play(getting dribbled past). He also stopped a massive opportunity for El Salvador in the US box with good 1 v1 defending.

Offensively his off-ball play was also big. Pulisic, like Weah on Musah’s side, was often drifting forward and charging up the wings. Aaronson rotated accurately nearly every time. The end result was that whenever attacks on Pulisic’s flank filtered out, we’d be able to sustain a second or third wave of pressure because Aaronson would immediately cover the space behind forcing El Salvador into multiple backpasses/giveaways. One play of note to me was when Aaronson pressured El Salvador into back passing, and then, when El Salvador went around Aaronson’s flank of the field to get into the final third, Aaronson applied defensive pressure from behind to help force a give away, and then, when they tried to bypass Aaronson directly, Aaronson again applied pressure forcing El Salvador into a back pass.

Aaronson is a very good defender for his club, was very good defensively against top-quality opposition in the Champions League, and scored in the 99th percentile of attempts and success rate in pressures. Half-spaces’ +/- tends to rate Aaronson as one of our best players because of this combination of defense and pressure. Simply put, he should be considered “undroppable” in situations where we’re playing against the ball(which will usually be the case vs elite teams).

Notably the midfield collapsed in the first 20 minutes when he was off vs El Salvador and Pulisic, who he was covering for quite well in the first half, became considerably less effective in the second.

There’s a bit of a misconception on where the strengths of our player pool lie in US soccer circles. Our players are not on cl teams because of passing or breathtaking technical play. They’re primarily on cl teams because of their ability to press and defend or to exploit space that their midfield teammates make for them by pressing and defending. Pulisic is able to dribble and do what he does on the ball because Chelsea play him alongside a bunch of players who are fantastic pressers and defenders. Aaronson covered the most ground in the champions league, made a high volume of defensive plays, and was in the 99th percentile for pressures attempted and press success rate. McKennie’s biggest plus with Juventus is that he can be everywhere and that he’s arguably the best presser on his team. In settings where we have a big talent advantage, it’s feasible for us to sacrifice some cohesion and let Musah go wild. But against teams and midfielders at or above our talent level, we need to prioritize what we’re good at, and that simply isn’t happening when we start an 8 who doesn’t press or defend.

People have brought up the conditions vs El Salvador to explain the performance and that’s fair to a degree. But that makes Gregg’s tactical approach more confusing for me. If the conditions were not there for us to play passes, why were we wasting so much time with side passes between center backs and cycling the ball between mids/wings in our middle and defensive third. The game called for directness and we decided not to play direct. I’m firmly in the camp that our “a plan” should be a variant of what we saw in the gold cup. Our players play in the Champions League not for their ability to pass and move, but for their ability to shut down attacks, win the ball high, and quickly exploit the spaces left behind by exposed opponents. We should be the Salzburg/Leipzig of international soccer and I’m starting to worry Gregg wants us to be a slower, more possession-based team we simply don’t have the personnel to be.