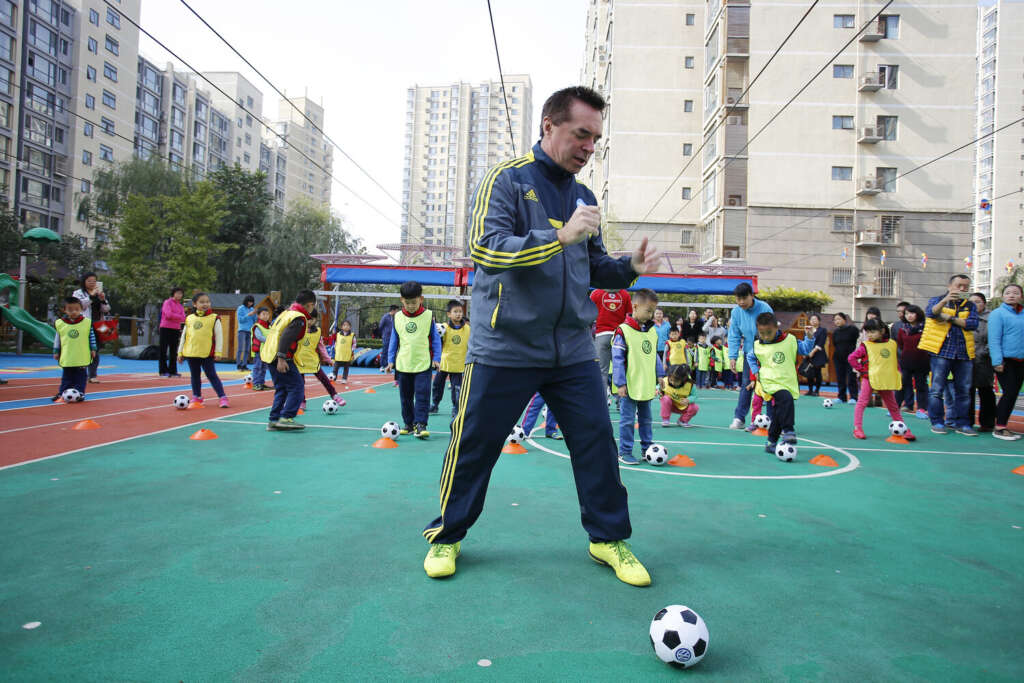 At its core, the Football Starts at Home® mindset emphasizes two things: the importance of getting children comfortable with having the ball at their feet as soon as possible, and the vital role that parents play in early childhood development. Football Starts at Home® also shares the message of the positive effects of early Parental engagement with their son or daughter and how this emotional support helps motivate and inspire families who can get any child off to a flying head start into the game of Football.

Football Starts at Home® is an innovative approach to youth development, focused on children ages 2-6 that has a proven track record of success in terms of developing both football-specific skills and general motor skills and coordination. The approach focuses on putting a miniature football at a toddler’s feet from the time he or she can walk; but rather than teaching children to kick the ball away from themselves, the focus is on pulling it closer and retaining control of the ball. The beginning of ball mastery which has much wider implications aside from developing Football Players. Teaching a young child the skill of paying attention, teaches a child how to access the all powerful “Learning Switch.” Only when you pay attention do you learn. When you don’t pay attention you activate an entirely different network of synaptic connections which distracts you from the original intent.

It is not surprising that Football Starts at Home® has attracted some of the top Researchers from such prestigious Universities as Stanford, Harvard, University of Houston, University of North Carolina, University of Michigan and most recently the University of Delaware. These Academic Professors are interested in studying the cognitive, emotional, social and physical skills being developed and the impact this has on child development. Together with the Professional MLS Club, Houston Dynamo, the University of Houston has created a Research Laboratory on the Universities Campus which is conducting a robust research project using students from Early Learning Centers, Kindergartens and 1st, 2nd Grade Children from the KIPP Charter Schools Texas. Inside the Universities Health and Human Performance Department there is an area called, Houston Dynamo/Dash, Soccer Starts at Home® Research Laboratory. This is where a Team of Researchers are busy at work analyzing the Data received from the ongoing project being implemented at several of the KIPP Charter Schools along with information and Data received from the Home Component of the program. There is a feedback loop through connecting the Home to the School and vice versa.

The Football world has surely not caught up to what Science already knows, that Skill Acquisition happens much earlier than supposed and the the role of Parents is crucial for development to flourish. The best countries that develop the best players in the world win the battle at the Entry Level, before a child has ever crossed over the line into organized play. Most countries believe that the battle is at the Elite Level, so they pour millions of dollars and resources into the top end thinking they will close the gap in development. The reality is, they rarely do!

Parents are key and any country that recognizes this and puts a strategy in place to create a Football Starts at Home® strategy will surely reap the benefits down the road. Coaches will always be important but it’s the Parents that are key from the beginning for early child development which sets the trajectory for development.

Get the Entry level correct and many of the problems for development cease to become problems. Because, the biggest problem with development is not recognizing what the problem is. That becomes the problem which goes misdiagnosed and the wrong remedy prescribed.

A Strategy in the absence of Culture doesn’t get you very far! Culture is King so create a Culture of Development in your Community which understands the importance of Ball Mastery from an early age and the role that Parents play in achieving this!