Jordan Pefok is a 6-2 ½  Striker born in 1996 who plays for BSC Young Boys in the Swiss Super League (first tier). Jordan is a French, Cameroonian American from Washington DC that developed through the Stade Reims Academy in France. You’ve likely noticed that Jordan also goes by Theoson-Jordan Siebatcheu. Siebatcheu is his father’s last name and Pefok is his mother’s maiden name. He has been clear that he would prefer to be called Jordan Pefok, so that is what we’ll do.

Jordan committed to the US Men’s National Team at the beginning of 2021 and made his debut on March 25, 2021 against Jamaica in a 8 minute appearance off the bench. In total, he has 8 caps and 1 goal, a game winner in the 2021 Nation’s League semi-final against Honduras. He’s played in two World Cup Qualifiers in the September window, but has not been called back since. 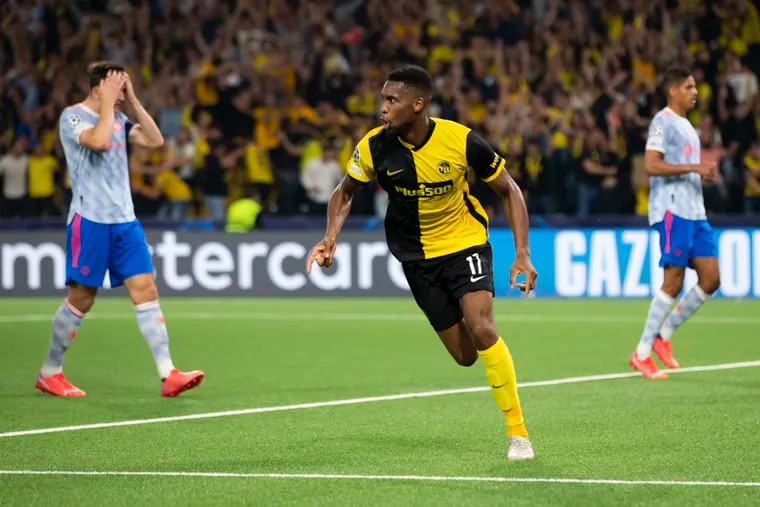 Jordan is a big and strong striker that uses his size and strength well in hold up play, aerial duels and getting in good positions in the box. He lacks short area quickness, explosiveness and top end speed, but has enough movement to keep defenders honest. He is not a striker that is adept at running behind defenses or making dynamic runs in the box, but he knows how to maximize the physical gifts that he does have.

Jordan is not what I would describe as an overly technical striker, but there are areas within his game that he does have strong technical ability. His touch is commendable. He won’t impress with complex or dangerous first touches, but he gets himself in shooting position effectively and he isn’t going to hurt you in build up play. He’s not a super dynamic passer, but he can effectively link up with midfielders and does well to distribute in hold up situations. He is very effective in aerial situations. He’s a technically sound when using his head both when shooting on goal and flicking on to other teammates. He isn’t a striker that is going to threaten you outside of the 18, but his body positioning allows him to strike the ball quickly and with somewhat consistent accuracy in the box.

Jordan is a physical presence in both his physical profile but also in the way that he plays the game. He’s willing to use his body to shield defenders and create points of leverage for hold up play and maneuvering his way into dangerous spots in the box. He’s highly competitive in both ground and aerial duels and he is also effective as the point man in the press. His work rate is laudable and he is comfortable mixing it up in all parts of the pitch. His game footage illustrates that he is a tough and hard working player.

You can get a taste of this in his FOUR goal performance in a league match vs Lugano here.

Jordan has been on an absolute tear for Champions League side Young Boys this past year. He has 18 goals and 2 assists in 32 appearances across all competitions. In 2,112 minutes, that comes out to a goal every 117 minutes.

He is tied for last in expected assists and shot creating chances per 90 and second to only Daryl Dike in carries and successful dribbles per 90.

His defensive metrics surprised me the most. He is first in tackles and interceptions per 90, but second to last in pressure per 90. He ranks third in aerials won per 90 behind Zardes and Sargent.

It’s important to not just look at quantitative data in a vacuum. These players play in varying levels of competitive leagues and clubs which impact these data points. Additionally, not all of these players play in a single striker system where they are the primary #9.

Josh Sargent plays on the wing for Norwich and Jesus Ferreira has played more of a shadow striker / attacking midfield for Dallas. Josh plays in the most competitive league of the six forwards featured here. Pepi now plays in the second most competitive league, followed by Dike who recently moved to The Championship. Pefok’s league (15th) is comparable to Ferreira and Zardes in the MLS (14th), according to Football League Rankings.

At the club level, Pefok plays at the highest ranked club (87th), Ferreira plays at the worst (349th), according to Global Club Soccer Rankings by FiveThirtyEight.

Based on what we’ve seen from Gregg Berhalter over the last couple of years, we can surmise that Gregg wants strikers that are strong pressers, connectors and consistently display dynamic movement in the box.

According to Paul Harvey’s research article on how the USMNT have been scoring goals, you can see that they have moved away from direct play and have focused more on build up play and capitalizing on turnovers from their press.

Paul also found that the most common actions that have led to USMNT goals are crosses from the endline, cutbacks and layoffs. This means that we are heavily reliant on attacking from wide areas and leaning on our fullbacks and wingers getting in and finding teammates in dangerous positions.

USMNT continues to struggle to play through and behind the middle of defenses, which is typically the most compact and defended area, but also the most effective way to score if you can break your opponent down.

World Cup Qualifying allows for expanded squads, so at the minimum, it would be strategically sound to see three different types of strikers on the roster to allow for tactical flexibility. A presser / dynamic mover (Pepi/Sargent), a connector / chance creator (Ferreira/Pepi) and a direct play / target man (Pefok/Zardes). Dike is sort of the outlier. While you would think that he profiles as a target man, he is most effective running behind and at defenses.

Pefok doesn’t fit Gregg’s preferred #9 profile. He is a competent, but not elite presser. He’s strong in hold up play, but not a dangerous chance creator and connector. He also isn’t super dynamic in the box, but he does have an instinct for being in the right place at the right time. He’s most effective in a system that tries to be more direct.

He is most similar in profile to Gyasi Zardes, who has been a consistent selection for Gregg Berhalter when healthy. Gyasi is slightly stronger in carrying the ball and creating chances, but fails to compare to Pefok in nearly all other categories (goal scoring, hold up play, pressing).